Did You Know that Airbus A320 Memory Size is 2,500 Times Smaller than Your Smartphone? 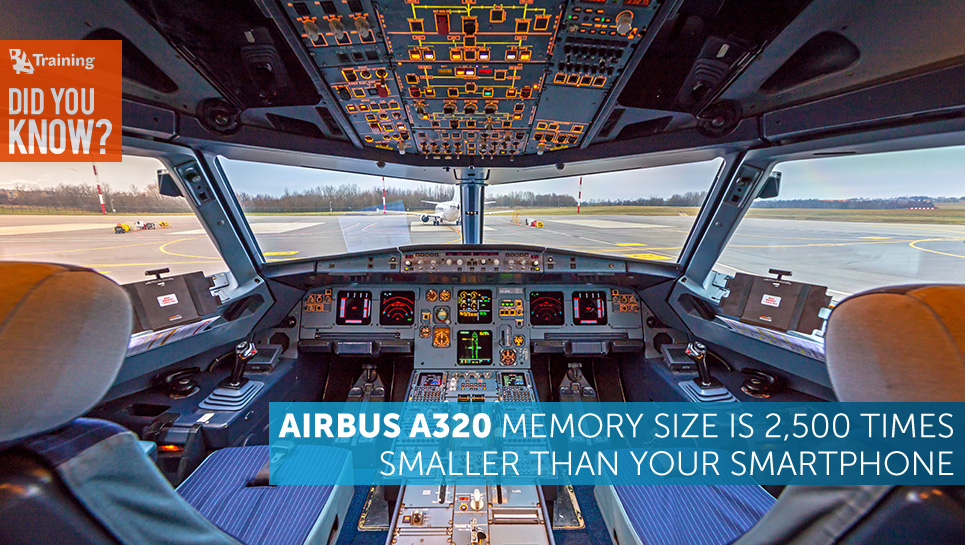 In today’s aircraft, all systems are integrated under Flight Management System (FMS). It is a technical brain that navigates modern airplanes safely through the skies. In many ways, it’s like the GPS for a car with waypoints programmed in between the initial point and the destination. FMS allows the airplane to hook up that routing with the autopilot and maintain the heading and attitude. It’s amazingly accurate.

FMS database is binary, and its capacity is reported in “words”, one “word” being equal to 2 bytes. Although FMS is the critical component of the entire auto-flight system since it is responsible for the performance, navigation, and integration of all components of the auto-flight system, its memory size is extremely small. Little do people know, that back in the day FMS was 192 kilowords (around 400 kilobytes). It is about 2,500 times smaller than RAM (Random Access Memory) of a modern smartphone!

To top it off, to this day most of the data is transferred to an aircraft with a floppy disk. Although recently portable data loaders (PDL) with USB have started to appear in the market, transferring data via a portable floppy drive to a floppy disk and then from the floppy to the aircraft via portable data loader is still the most common and universally accepted way. Even big airlines, for example, the biggest airline in Lithuania, Avion Express, is using this method.
In its evolution, FMS has had various sizes and capabilities. It can be as small as 400kb for earlier FMS software and eventually increasing up to 20 Mb for the most recent FMS upgrades. However, with the evolution of air navigation and complexity of airspace, this capacity milestone should soon be passed.

← Prev: Did You Know That Airbus Aircraft Have Identical Flight Decks? Next: Did You Know Why A320-family is the Bestselling Narrow-body Aircraft? →